War in the oil branch: prices are pressuring producers as Saudi Arabia keeps on its policy. The drop in oil prices favors consumers, companies’ balance and results and countries’ balance of trade, but oil companies see how revenues are suffering. 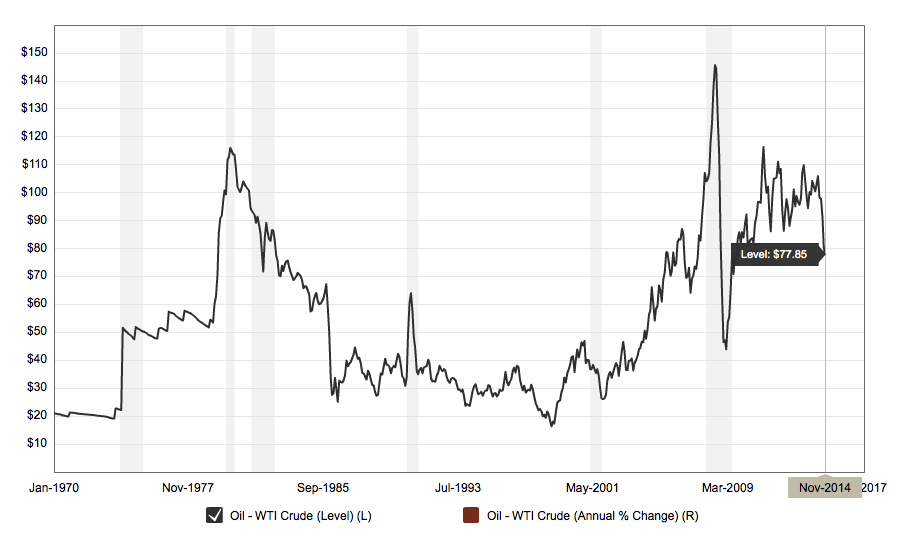 This chart from Macrotrends is very clear. West Texas Crude decreased a 26.5% since June. The sector has to deal with emerging companies from Asia and Latin America as with new alternative sources, as oil sands from Canada. Last OPEC market report mentioned weak oil fundamentals, a stronger dollar and financial-related sell-offs as reasons for the pressure on the crude oil markets. On the other side, the organisation underlines the improvement on the demand side, thanks to a certain economic recovery. Low prices increase demand but also affect oil companies’ accounts. Where is the balance point? The situation has implications in the markets. What is the evolution of the main oil companies? Let’s see the T-Advisor figures:

BP sales increased a 0.9% in 2013 compared with 2012, till US$ 379.1 bn. Net income more than doubled the result, till US$ 23.4 bn, a 112.8% more. The comparison in the main data made by T-Advisor has the following results: Royal Dutch Shell has the only positive performance this year, while BP has the worst, although last year results were the best amongst the four. The whole branch has a very low score, affected by the negative results of the year. Lower oil price and new big competitors from emerging markets have consequences amongst this leading group. The most volatile and risky is China Petroleum, the largest Chinese energy group.