Have you ever thought about the evolution of the financial markets since the beginning of the century? If we take some figures, we can get some ideas about the deep changes in this landscape. Let’s begin, say, for the global market capitalisation. If we take the figures from the World Federation of Exchanges, it multiplied 3.5 times from 2003, January, to 2015, May. That means, in dollars, from 20.3 trillion to 70 trillion. This evolution has taken place when the world experienced in the middle of this period the worst financial and economic crisis since the 1930’s. The most amazing evolution happened in Asia (more than 6 times, from 4.3 to 26.3 trillion). The number of stock exchanges has also jumped from 44 to 73 markets around the world. This figure is interesting, because there were two trends in this timeframe: several mergers in the developed countries and new exchanges in emerging markets. In Asia, there have been five new markets created in these years, and 9 more in the Middle East. Another data to take into account refer to the stock market ranking by market capitalisation. Although NYSE maintains the top 1 in the whole period, there are 4 markets from Asia in the top 10: Shanghai and Shenzen have joined the group formerly composed by Tokyo and Hong Kong. The capitalisation of both Chinese exchanges soared from 0.5 to 10 trillion in 12 years. There has been also a deep evolution in the Indian markets (from 0.2 to 3 trillion), although not so amazing as in China. This is the top 25 in 2003 and in 2015. 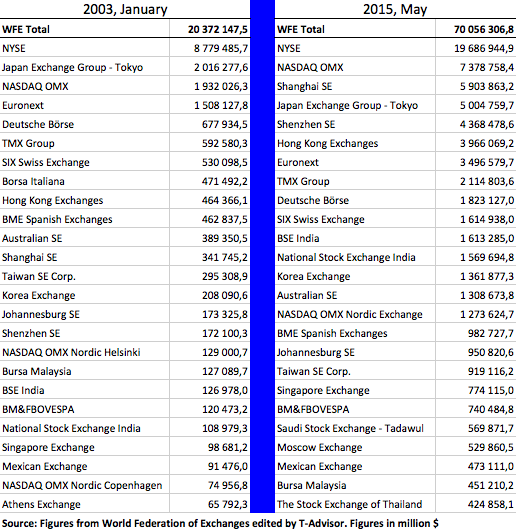 Another interesting trend to get from the Stock Market statistics is related to the assets traded. Do you know how many ETFs were traded in 2003, January? Only 48 and almost the half were traded in Japan. And in 2015, May? 6,872 ETFs. In these years, Japan does not play almost any role and the kings in the ETF trading are NYSE, Deutsche Börse, Swiss Exchange, Euronext and Mexico, in descending order. And finally, what is the asset that registered a fall in the listing? Yes, bonds. The number of listed bonds fell down a 37%, from 68,304 in 2005 to 43,043 in 2015. Korea and India are the main issuers, with more than the 50% of the listed bonds. Regular news is sometimes a trouble to find the deep streams that are moving finances. There are relevant changes in regions and financial instruments. We are living an interesting period.