This year is not going to be easy for Europe. Apart from the next negotiation between the European Union and Great Britain for the Brexit, the continent will celebrate three main elections: Germany, Netherlands and France. These three countries are founders of the EU in the 50’s and there is a reaction against Europe in all of them. The current president, the socialist François Hollande, announced last year his intention to not to repeat as a candidate for a new term. His presidency dealt with several difficulties both in economics and in politics, specially related to the terrorist attacks (in Paris and Nice). The polls were very negative, as he was rejected for a huge number of voters. Hollande retreat has opened new chances for other candidates. The best positioned was the right-wing candidate François Fillon, but the corruption scandals linked to his family have reduced his chances. In this case, the second best positioned candidate is the far right politician Marine Le Pen. Marine Le Pen promises to abandon de EU (also known as Frexit) if she win the election in next April-May. Her popularity and the scandals around Fillon have worried the markets. What if she wins? What effects would it have? If we look at the chart of the evolution of the French benchmark index CAC40, the trend was bearish when the Fillon scandal popped up. It is also interesting the parallelism amongst the British, the German and the French markets. 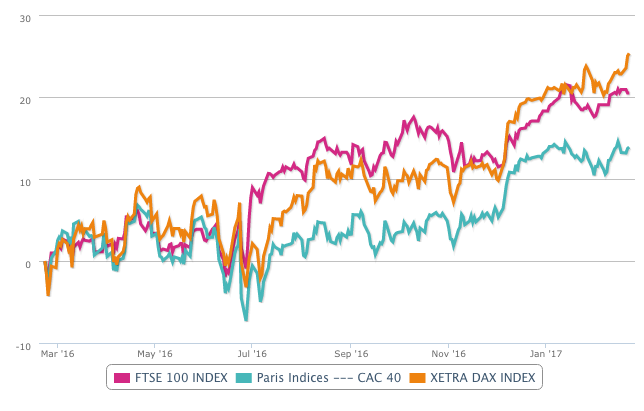 How can we understand this chart? Well, this correlation also means that all three economies have deep boundaries. It is not so easy to change such narrow financial and economic links just with a referendum or a decision of abandon the EU. In any case, the French stock exchange benefits from the general bullish trend, as we can also perceive in this chart: 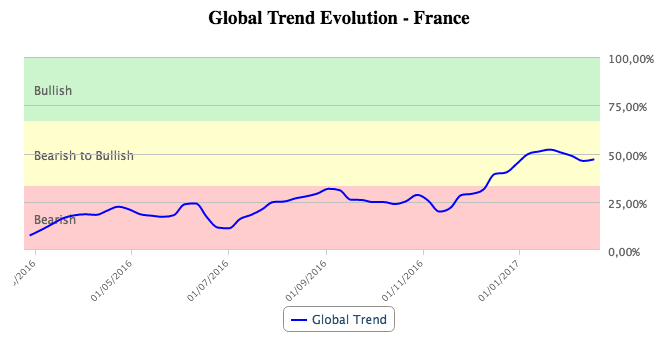 If we consider the CAC40 best performers, there are several industrial and banking companies, as the T-Advisor list shows: 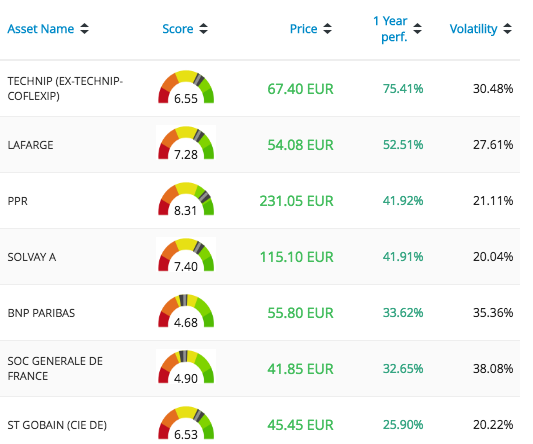 So, France is still a powerful economy with several competitive banks and industries and the markets have strong trend boundaries with Germany and Britain. It is possible a surprise, but it is difficult to think that this structure will change even in the middle term. In any case, a victory of Marine Le Pen would have very relevant consequences for the evolution of the European united economy.